While most folks were out doing their holiday shopping and partying through the end of the year, I had the dubious distinction of being summoned by my old friend “BB”. He had shown a great deal of creativity this time by sending a text message and signing off as “Santa’s big helper”. Braving some less than desirable weather, I pushed the Tundra through some slick roads and icy conditions to meet with the big guy. The last meeting had been in Forest Lakes, and this time he had roamed all the way to the southern limits of Pinetop, just before the White Mountain Apache lands begin. Meeting at 3:00 in the morning is not a great time for me and I had to consume vast quantities of Circle K special blend coffee to stay awake. I finally arrived at the appointed spot and climbed out of the truck.

“BB” somehow appeared at the edge of my vision in the moonlight. “Greetings old man” he growled. “Have you been a good boy this year?” At 3:00 in the morning I was not in a mood to play his game so I shot back at him “Cut the crap “BB”, I’m tired, cranky and sleep deprived. What the heck was so urgent that we had to meet before the holidays?” “BB” took a long look at me and started doing that darn chuckle of his. “Testy, testy, testy aren’t we. You better behave or I will not pass on good reports to Santa. And I have an “in” this year with the big guy.” By now I could tell that something was up, so in order to get the darn thing going I said” OK “BB” what is your “in” that you are talking about?” With a flourish, “BB” tugged on a satchel that he had draped across his withers. In the satchel was a sparkling new Tinepad. “Just look at this baby” he said “I can do all sorts of really cool stuff on it and best yet, all I have to do is be near a WIFI spot to get online”. I did some calculations and figured we were less than a mile from the Arizona Game & Fish Department Pinetop office. “Let me get this straight “BB”, you are basically using the department’s internet availability to do whatever you are doing”. “BB” got an indignant look and said “Hey, they’ve been using elk for all these years I figure it’s just a little payback”. I pondered that for a moment and could not deny that the department basically came about through hunting tags and licenses. His logic was unassailable. “Ok, what is all this nonsense about you having an “in” with the big guy?” “BB” got that sly look of his and started with what was obviously a pre-arranged speech. “Using the latest technology of the Tinepad, I was able to do some thorough research that dates back over three hundred years. Did you know that reindeer and elk are distant cousins? We have a historic background that dates back to really pre-historic times and aside from a few genetic alterations here and there we are basically reindeer that have adapted over time to our current genetic state. So, I did a genealogy study and low and behold I am a direct descendant of reindeer. I was able to hook up with some of my long lost cousins and believe it or not ……. I am a cousin of Rudolph.”

I was not sure whether it was too much coffee or I was hearing things. I looked at “BB” and said “Wait a minute. Are you trying to tell me that you know someone who works for Santa Claus?” “BB” calmly looked me straight in the eye and said “Yep, me and Rudolph are way cool friends now. He even signs off on his e-mails to me with a “BFF” notation. After we explored the genealogy report, we came to the conclusion that he and I are truly cousins, 75 times removed mind you, but cousins none the less. So, I have been appointed as Santa’s helper here in Arizona. It’s a really prestigious position and I am not taking it lightly. So, I have a “master list” that I will be presenting to Santa when he flies through here on Christmas Eve. Do you want to take a look at the list?” There are times in my relationship with “BB” where I have learned to just go with the flow. So I simply nodded my befuddled head and said “Sure, let’s take a look at your list.” 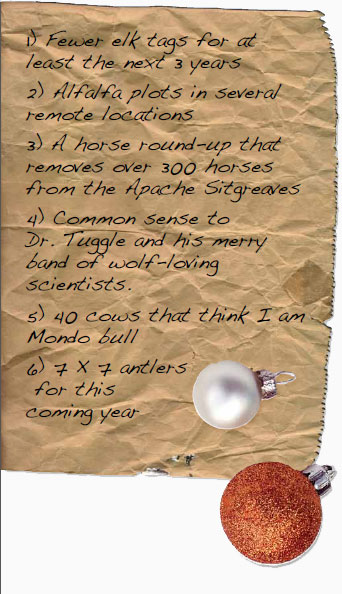 Using my flashlight, I began unraveling a lengthy document. Not surprisingly, “BB” had put his name first and listed to the right are his wishes from Santa.

I looked over at “BB” and started laughing. “OK “BB”, that’s a list I could go along with as well. I certainly hope that the year treats you well and that we have many more encounters like this. Could we just do them at a more reasonable hour?” “BB” snorted and said “Hijacking the department’s WIFI takes unusual hours. We will hook up again in the early spring. I just wanted to give you the heads up on my sudden new found importance. SO…. What’s on your list? I do have some pull now so let’s sit down and go over what you want for the coming year.”

Continue to “BB” The Weatherelk!