As fate would have it, “BB” decided to meet with me closer to Big Lake this time rather than the Show Low area. He decided to contact me using his new wildlife social media account called Tinebook. I was amused to get the notice on my elkhabitat@gmail account and I perused some of the photos that Tinebook had to offer. “BB” is “friends” with a lot of different bulls and boys being boys, there were a few photos that showed how unique the male of all species are. Since the bachelor bulls are all gathered together, and since this is a new venture that “BB” had put together, Tinebook is almost predominantly about bulls for now. The typical chatter about “who’s got a bigger set of antlers” was prevalent, but I did copy one picture that caught my eye. It was from a distant nephew of “BB” that lives way over in the Tusayan area. His Tinebook name is “Dennis the Menace” and I have included a photo that was posted on Tinebook. I was very interested in talking with “BB” about this nephew, so armed with water and a backpack, I headed towards Big Lake.

We met close to dawn on what surprised me as being a chilly morning. The wind was up, but  down in the little canyon he had chosen, you could see and hear the big Ponderosas on top creaking and waving in the fierce winds. “BB” came up through the canyon and only god knows where he had been bedded down. He plodded along in that strut I am so familiar with. His antlers had sprouted nicely, but I think he will end up being only a 360” class bull this year. “Morning “BB”” I said. “Nice location for us to meet. Just where the hell am I?” “BB” snorted and said, “You just want to know my hidey holes, and this location probably will stay a secret as long as you don’t write about it.” I had taken so many dirt roads and twisted trails that I was confused. The only thing I knew for sure was that the gray light of dawn showed we were in a north south canyon. “Okay “BB”, where did you come up with the name Tinebook?” “BB” got that goofy grin and said, “You humans have this thing called Facebook, so I kind of copied the name a little. I thought about the name “Muzzlebook” but that didn’t seem to have much pizzazz.  Then I thought about all the great antlers I see and I wondered about tine length and the term “Tinebook” just popped into my head. Hanging out with some of my brethren we decided to try and keep in touch with this new gizmo and it just took off.” 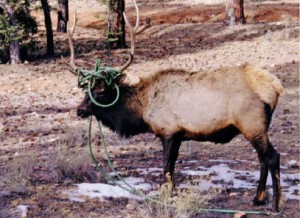 I popped out the photo of his nephew Dennis and said, “Just what is the deal with Dennis? If I’m not mistaken, that’s a garden hose he seems to be wearing around his puny antlers.” “BB” chucked and said, “That goofy nephew of mine is always getting himself in hot water. His first pass was with barbed wire and someone from the AZGFD put a dart in his big butt and when he got up, the wire was gone and he felt a little loopy. From that point on when he wanted to get a little crazy, he would find something to wrap around that little rack and hope like all get out that someone from AZGFD would dart him again. That’s when he got the nickname “Dennis the Menace”. He was  really depressed when those antlers fell off a few weeks ago.” I peered at the photo and commented, “He seems to have decent size, but not much on antler growth.” “BB” grunted and said, “He’s just a 2 year old bull. He’s got great genetics and he’ll have great antlers by next season. Give the kid a break and wait 2 years from now to judge him. Besides, have you seen any massive rainfalls recently? Seems like almost every waterhole I know of is bone dry and my favorite grazing spots are all just like crispy brittle blades of stunted grasses. There won’t be much growing to the maximum sizes we are all used to.” I nodded my understanding to his statement. The usual drought predictions were holding true and all we could hope for was a heavy monsoon season. Moisture was almost non-existent and the humidity levels were creeping up slowly. The monsoon season was supposed to be going full blast by now and there have been barely any  rains all across the Rim. We watched the brightening sky and he motioned for me to get closer to the deep shade. “You can’t expect me to be hanging around in full light boy. A bull doesn’t get to be as good looking as me by traipsing across any open spots in full light.” I walked over to the deep recesses of the canyon wall and it really was at least 10 degrees cooler. I had a couple of more questions before my antlered buddy would be heading for his long day siesta so I started out with my most important one. “OK “BB”, any ideas where you might be running this fall?” “BB” glared  at me and responded, “Do you really think I would give you a clue as to where I will be hanging out this fall? I heard that you will be guiding some friends this fall in 3A and 3C, so that one’s off the list. I hear tell that old man Sitko has a muzzleloader in unit 1 as well, so that’s certainly off my list. Besides, I go where the ladies lead me, and hell, us bulls never know where that takes us.” I thought about his response and nodded my approval. “I guess that leaves either 23 or the reservation right?” Again a frustrated “BB” just stared hard at me. “What did you miss by that last comment boy? I go where the ladies take me and I darn sure am not giving you any clues. Your luck with bulls has been too good for too long and I may just stay in a tight area with a few select lady friends and keep my hide and horns intact.” I knew our time was limited, so we arranged a meeting for just after the early season rifle hunts. He expressed his desire to meet in Forest  Lakes at our usual hang out, the Bugle Inn. Of course the time and date are kept a secret, so don’t any readers think about trailing the Prius up the hill. I began my trek out of the canyon and turned to wave goodbye. Of course “BB” was long gone, but I knew he had his eyes on me, so I waved to the wind and headed back to the reality of life in the city.

Continue to Duel in the Pines