Duel in the Pines

I was heading through Christopher Creek when my phone beeped that I had received a text message. The surprise was that the text was from “BB” and as usual, the message was brief and to the point. “No go on meeting at Bugle Inn. Meet at the boundary fence line across from Deer Springs Lookout.” We had previously scheduled our meeting to be at the Bugle Inn, but for some unknown reason, “BB” had changed plans at the very last moment. I was curious but not concerned with the change and late that evening I headed out from Forest Lakes to the meeting spot. This year the archery bull hunt was held without the benefit of any moon and it was absolutely pitch black when I arrived and shut down the Tundra. I clicked on my hat lights and headed for the boundary fence. The night was alive with all kinds of screaming bulls and the bugles, chuckles, grunts and drumming were all rising up from various canyons around Deer Springs. I had archery hunted for deer in this same location a few weeks before and had done plenty of canyon exploration that showed me just how many elk were running through there each night. I easily found the fence line and snapped off my hat lights to absorb the sounds and take in the magnificent star-lit sky. 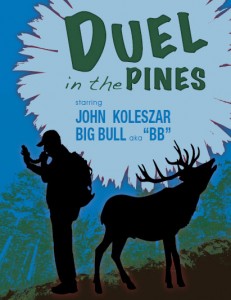 As I watched, listened and waited, I decided to try a few bugles, just to add to the frenzy. I grabbed my mouth diaphragm and grunt tube and let out a long, piercing scream. To my satisfaction, several bulls immediately responded with their own thunderous bugles. I was feeling pretty good until “BB” whispered from almost on top of me. “That was pathetic. My brethren must be trying to pump up your ego by responding. I wouldn’t give you a half call back, let alone a grunt or two.” It took a few seconds for me to realize that I had jumped darn near into the boundary fence. “Damn it “BB” how many times do I have to tell you not to sneak up on me like that? You scared me half to death!” “BB” just chuckled and said, “You deserve that boy, that bugle call you do is worthless.” I flushed with the righteous indignation of a man who has spent many hours practicing the craft of calling and I blurted out the words that would come to haunt me, “I bet I’m a better caller than you are!” “BB” dipped his antlers and let loose a rousing rendition of his call and I plugged my ears. Sadly I had neglected to side step away from him and the ever present mist of “BB” spraying after his bugle was all over my boots.

“BB” started actually laughing as he watched my discomfort at the new boot aroma. “Thanks “BB” that was really uncalled for. Granted, you can do a bugle better than me, but I have more weapons than you do. I can sound like a young bull, old bull, cow or calf.” I knew he was thinking of a clever response, I could hear the gears turning in that tiny brain of his. “Why not have a contest? Whoever calls in the most cows, calves and bulls wins and the loser has to buy the other drinks at our next meeting.” It took all of 2 seconds for me to agree to the challenge. The ground rules were quickly laid out. I would stay on the Apache Sitgreaves and “BB” would go over to the reservation. We would separate by 200 yards and we had 45 minutes to try and call any and all comers to our calls. Loaded with optimism, I broke into a trot and went over to the lookout tower. The rules were that we would each do a call and then count coup on anything that came in. We had flipped a coin and “BB” had won, so he went first. As usual, he let loose with a booming, plaintive scream and let it die down into his deep grunt. I followed up with what I thought was a pretty good response call, ending with my own peculiar grunt at the end. As time ticked away, I began to have some concerns. Nothing was coming in to my calls. Granted it was pitch black out there, but I still felt that there should be more of a response. “BB” kept screaming, but I switched over to my cow calls, thinking that perhaps the seductive chirps I had perfected would do the trick. Finally, a lone young cow came into my area. I could hear her chirping back at me so I knew I had at least one in the bag. I flicked on my hat lights and there she stood, searching for the other cow that I had perfectly mimicked. She had a calf with her and low and behold a rag bull was just behind both of them! I knew that would give me at least some points and I kept on calling as often as I could. “BB” on the other hand never seemed to break a sweat. He would call every 5 minutes and then I could hear him raking his antlers across a helpless tiny Ponderosa. As the clock ticked down, I felt more and more confident. Finally, the 45 minutes were over. I turned on my hat light and sauntered down the road to the reservation boundary. 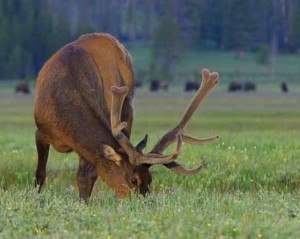 “BB” was contentedly grazing right at the fence line, and I could not figure out why he quit calling. “Hey BB” I said, “why did you stop calling?” “BB” looked up and then started smirking. “Take a look over to my left boy!” I swung the lights away from “BB” and looked to his left. A whole herd of cows and calves had seemingly appeared out of nowhere. They had come in as silently as ghosts – no mewing or calling, no barks nothing. I counted 25 and finally agreed that he had won the bet. “BB” started another chuckle and then broke into a deep laugh. “Oh boy, I got you on that one! You may be okay for human calling, but never try and challenge a former champion cow caller. Even when I was a mere raghorn, I just had a way of getting the ladies to come in to my bugles. It never fails and between you and me, I think some of them just flat out recognized my beautiful voice.”

I agreed to pay off at our next meeting, and then remembered that he had changed locations. “Why did you decide not to meet at the Bugle Inn “BB”? We had agreed to go there and then you changed it.” “BB” seemed to get a little nostalgic for a moment. “Ya know boy, we met there so long ago, and it really was a cool place to meet and hoot and holler. But when I ran close to Forest Lakes this rut, I swear there were so many people, so much traffic and so many new places, I just thought it might be a little dangerous.” I thought of how much had changed over the past 8 years and “BB” was right. Progress, change and development had made the tiny hamlet now a tiny little city. They will probably have stoplights and speed traps in a few years. I noticed “BB” had gray hairs as did myself. “Time stands still for no man or elk “BB”. We’ve had a good run up here but it has changed a lot. There were shining times and we were young and crazy, so where do we go from here?” “BB” thought for a moment and finally decided. “Get a reservation camping pass and I’ll meet you outside Maverick Camp just before the snow flies.”

As I drove back from the ridges, I thought long and hard about all the humans I’d seen during the archery hunts I had been on. The excessive quad use at early and late hours, going up and down without a concern that a hunt was under way. The campers who played rap music as loud and as long as they could until almost daylight. The more I thought about it, the more Maverick seemed a perfect place. I smiled to myself and the thought made the whole ride back all the more pleasant.

Continue to “BB” In Another World